Adam, can you tell me how you came to be published?

Funnily enough the journey began with pictures, not words. During my downtime at university and on my lunchbreaks at work I used to enjoy sketching characters on whatever paper I had available. After I had a decent collection, I began wondering who they would be, what sort of personalities would they have, and how they would interact with each other if they were to meet. If they met, in what setting would it take place? Would they be related? Would they be friends or enemies? Eventually I purchased three little notepads (that I labelled plot, characters and settings) and began to write down all of my ideas and the series grew from there. 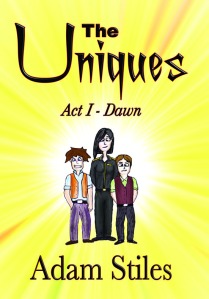 The cover for Adam's new book, The Uniques

The next step was to decide whether or not the ideas were good enough to warrant taking them any further. I told myself that I would start writing, and if the process seemed to be going well and I was enjoying myself, then I would finish it.

In no time it seemed Act I was complete, and within about a month of sending a three chapter sample to Zeus I was signing a publishing contract.

Tell me about the process of completing the book.

The actual writing process only took me a couple of months, but the planning stage was quite substantial. It was during the planning that I became my own main obstacle. I was quite harsh on my own ideas and could never settle on anything, which eventually began to frustrate me greatly.

In the end, to save me from myself more than anything, I launched into the writing process without having finalised all of the world rules or events. It was a risk, but my thought process was that I would let everything evolve naturally while I wrote and hopefully whatever I came up with would feel more ‘integrated’ with the world because they were being defined at the same time.

This turned out to be the jumpstart that I needed, and I am extremely satisfied with the finished product.

What did your publisher expect from you in terms of rewrites?

Zeus didn’t ask me to rewrite anything. They edited the manuscript to their house standards and then (after I made a few final changes myself) it was good to go.

Did you do a book proposal for the book or your projected series?

I just did a proposal for the first book, Dawn, but made it clear that it is part of a series. I’m happy to take things as they come instead of having the added pressure of a ticking clock in the background. I work better that way.

The Uniques is a planned series of five books. I believe this will be the perfect length for me to flesh out the world, story and characters without stretching my ideas thin. I have a detailed spreadsheet with a breakdown of the overall tale across these five books, so I just have to get stuck into writing the rest of them. Having said, I made sure that I left enough holes to allow for story improvisation as I go, since that strategy seemed to work very well for Act I.

Why did you choose Zeus Publications?

Becoming an author was never something I expected to happen, so I had little knowledge about how to find a publisher. I did an internet search on Australian publishers and chose Zeus for several reasons. I had already heard of them, which was of course a strong start because I wasn’t aware of a lot of the publishers on the list I found. They are based in Queensland, which is where I live, and I am the sort of person who values being associated with the ‘locals’. Their website and submission guidelines were very professional, and they were extremely quick to respond to my submission and the questions that I had.

Do you have an agent?

I currently do not have an agent. At this early stage I feel I will be able to handle everything by myself. When things start to take off I may consider using an agent, but I will cross that bridge when I get to it.

Did you do anything to build your profile as a writer prior to getting published?

The basic idea was just to tell anyone and everyone about the novel before it was actually released. I am thankful to have contact with a lot of very helpful and supportive people who have been more than happy to help me spread the word, and you can never underestimate the power of the internet.

My friends and I joke about how often I plug my own series in general conversation (the amount of times I have worked the word Unique into a sentence…), but you have to get the word out there by any means.

Tomorrow, Adam explains the strategy behind his online forum for The Uniques.

Cath Isakson set up this blog to explore how published writers have 'made it'.

Cath lives in Tasmania - an island off the south-east coast of Australia. She writes and edits creative fiction and online content.